The 125th Hampton Court & Dittons Regatta was blessed with a mix of full sun with some cloud at times to give the racers a respite. To mark this special anniversary the Queen’s Row Barge ‘Gloriana‘ provided the glitz & glamour, complete with the ‘tossing’ of oars in salute as they passed the Clubhouse. One other special event was the invitation race of the two 1829 replica Oxford & Cambridge cutters, with the largely Skiff Club crew,  Captained by our very own Brind Waldron & coxed by Tom Millest, successfully outclassing their opposition to take the win.

In the regular Skiffing & Punting events The Skiff Club team put up a credible force, which resulted in the Ladies increasing their lead over the Gents. Having said that David Sawtell did pick up the first win of the day in the Gents Junior singles, in a row over, due to his opposition not turning up. I’m sure David would have preferred to have won this in full-on competition but that shouldn’t detract from the win. You’ve got to be in it to win it & that includes turning up to race.

Our Ladies, this time a pairing between Viv Gunn & another Porter, sister of Jane, Alison Porter, coxed by Lesley Russell came through their first heat against an SSPC crew by a comfortable 4 length margin in the Ladies Novice Doubles. However with Alison still eligible to race at Novice Restricted in Ladies Doubles, she stepped in to help with another no show from DSPC, to enter & win in a composite crew. Alison stroked the pair to victory over a second DSPC crew, winning by a comfortable margin & the need for a well earned rest before her final with Viv. Bringing the regatta to a close, our Ladies produced a controlled demonstration of powerful skiffing to cross the line 1 2/3  lengths over their DSPC opposition.

Gents 1 point, Ladies 1.5 on the day, so overall the Ladies still lead by 1.5 points. Come on guys, Chertsey beckons.

Don’t forget to check out the Gallery for a selection of photos of  The Skiff Club in action & enjoying the celebrations of the 125th regatta. 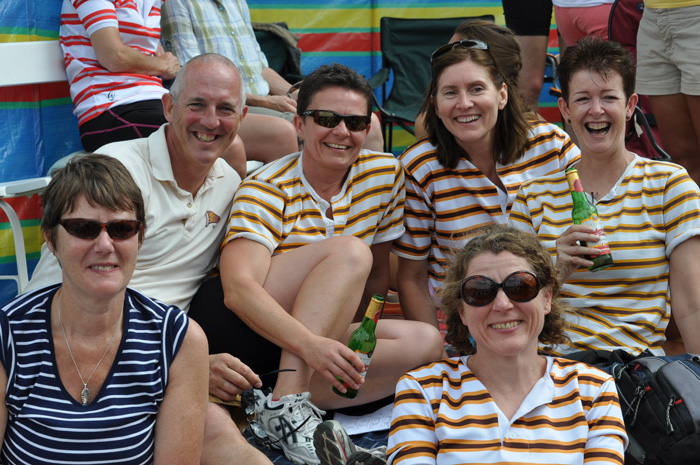