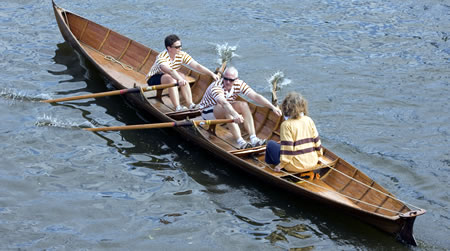 Skiffing refers to the sporting and leisure activity of rowing (or more correctly ‘sculling’) a Thames skiff. A Thames skiff is a traditional hand crafted, clinker-built wooden craft of a design, based on Thames wherries, which were operated by ‘Watermen’ as a water taxi service in London, and have been seen on the River Thames and other waterways in England and other countries for nearly 200 years. Sculling means propelling the boat with a pair of oars (blades) as opposed to rowing, which requires both hands on a single oar.

Skiffs have fixed rather than sliding seats, and the blades are held in thole pins at the side of the boat rather than in outriggers. The blades are made of wood with leather collars and traditional spoons. Pressure is applied by the feet against an adjustable wooden plate known as a ‘stretcher board’. Skiffs are usually ‘Singles’ with one sculler, or ‘Doubles’ with two scullers (one behind each other) and a coxswain. However skiffs with more scullers or incorporating sail are also used. Skiffing takes place in the Netherlands and Argentina, using the design of traditional Thames skiff, although Argentinian skiffs usually have outriggers instead of tholes.

A punt is a flat-bottomed boat with a square-cut bow, designed for use in small rivers or other shallow water. Punting refers to boating in a punt. The punter generally propels the punt by pushing against the river bed with a pole.

Punts were originally built as cargo boats or platforms for fowling and angling, but in modern times their use is almost exclusively confined to pleasure trips. Punting is possible on most of the Thames above the tidal limit at Teddington; even in places where the river is broad it is often surprisingly shallow, especially at the edges where punting ledges are maintained.

Punt racing, as a sport developed in the 1880s. Thames Punting Club was formed in 1885 as a racing club. It is now no longer a racing club but functions as the sport’s governing body. Races are normally held over a distance of up to 880 yards (800 m) along a straight reach of the river, each end of the course being marked by a pair of poles called “ryepecks” which are firmly pushed into the river bed before the race. Races are always one punt against another, one having the inner lane and the other the outer lane. If the outer lane has consistently deeper water, then the length of the outer course may be reduced to make the race more even.