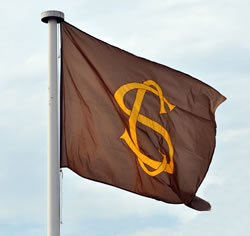 Modern racing skiffs are evolved from working and leisure boats of the 19th century, when skiffing as a form of exercise and a way of touring on the Thames was enormously popular. (see “Three men in a Boat by Jerome  K. Jerome).  The design of racing skiffs is encoded in the regulations of the Skiff Racing Association, but is similar to the many leisure and camping skiffs found up and down the river today.

The Skiff Club was founded in 1895 and was the first club devoted to skiff racing. There are now seven clubs (six on the Thames, one in Cambridge) who preserve the tradition of skiff racing.  Regattas are held, principally in July, August and September, with racing for all levels depending on experience, previous racing success and age.

For its first 77 years The Skiff Club was based at Turk’s boathouse at Kingston (initially sharing with The Canoe Club, later to be the Royal Canoe Club) and, after a number of years without a permanent home, shared with the RCC in the purchase of the current premises in 1994.

As well as racing, skiffs offer an excellent opportunity to enjoy exercise in congenial surroundings, become fitter and take part in a variety of expeditions, which are occasionally organised, to other waters. Basic skills are more easily learnt than in “best” boats and progression to sufficient competence to be fairly independent can be rapid.

We have recently updated our fleet. Our oldest boats were built in the late 1800s (and, we think, very beautiful) but are beginning to show their age.   In 1995, we had three doubles built to celebrate our centenary.  In 1998, with the aid of a grant from the National Lottery, we took delivery of another set of doubles and three singles. And more recently in 2012 we had a new pair of doubles built by Mark Stanley in Windsor, at a cost of approximately £44,000 the pair.